The Unintended Consequences of the Over-Regulation of Short-Term Loans 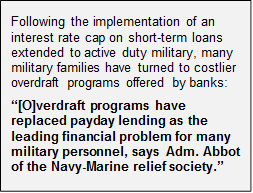 Some state and federal regulators have called for an annual percentage rate (APR) cap on the fees for short-term loans and/or a limit on the number of cash advances a consumer can borrow each year. These attempts to over-regulate short-term lending harm consumers by eliminating a critical choice for thousands of people who need short-term credit. Consumers’ need for credit does not disappear once these regulations are in place. Instead, they either cannot meet their financial obligations, or they are forced to choose costlier or less regulated options, such as overdraft programs, unregulated loans or bankruptcy.

For these reasons, more than two-thirds (69%) of payday loan users oppose government restrictions on the loans, according to a national poll. The findings affirm the results of a Harris Interactive Survey of payday loan borrowers, which found that 95 percent of borrowers of regulated storefront lenders stated that it should be their choice – not the government’s – whether to use short-term loans.

Consumers face real risks when they are forced to resort to unregulated loans, which are widely available online even in states that have banned short-term loans. Unlicensed lenders offer loans that involve higher, and none of the consumer protections that regulated companies provide. Lenders that operate outside of the jurisdiction of federal and state regulators are not subject to state examinations, lender compliance standards, or formal complaint processes. As a spokesperson for a state chapter of the Better Business Bureau warns, “If we do away with payday loan companies in this state, we are literally pushing the poor to these websites [for unregulated or offshore loans] where they will be, in my opinion, completely taken advantage of.”

In recent years, several states and the District of Columbia have implemented APR caps and other restrictions on short-term credit. Below are some of the unintended consequences states have experienced after limiting or effectively banning short-term lending: