More than eight out of ten Americans (81 percent) say a federal agency should not have the authority to propose a federal rule that would decrease the revenue of a legal industry by up to 84 percent, a likely outcome that the Bureau has acknowledged. The poll results come as the CFPB prepares to release new federal rules that it says will lead to "substantial consolidation" in the regulated short-term payday market.

"The CFPB's proposed rules are a direct threat to millions of Americans' access to affordable, transparent and reliable credit," said Jamie Fulmer, Senior Vice President of Advance America. "For the already highly-regulated businesses that offer these consumers' preferred credit option, particularly smaller lenders, they are a death sentence."

"The Bureau has disregarded the views of small businesses, policymakers and - most importantly - the people who actually use these loans," Fulmer continued. "The resulting rules will leave consumers with even fewer options to responsibly manage their finances, and will instead push them into the arms of unregulated lenders or more expensive options, such as bank overdraft programs." 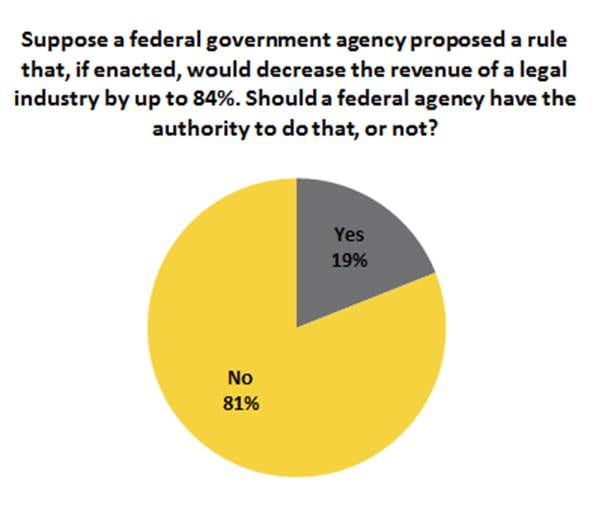 The national poll also examined respondents' views on limiting how often consumers can access credit, a key component of the CFPB's proposed regulations. 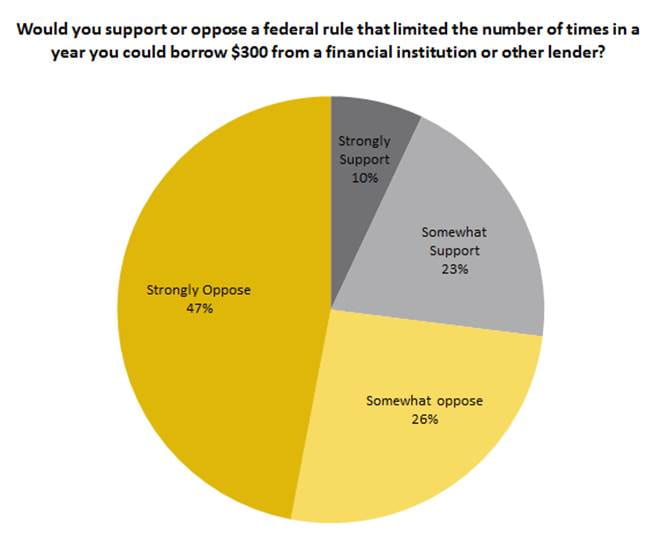 Nearly three-fourths (73 percent) of Americans would oppose a federal rule limiting the number of times someone could borrow $300 from a financial institution or other lender; nearly half are strongly opposed. The Bureau's proposed rules effectively limit the number of loans consumers can borrow in a 12 month period, arbitrarily restricting consumers' access to credit when they most urgently need it.

The survey was conducted by KRC Research in May, 2016, via an online survey of 1,026 nationally representative Americans ages 18+.

The findings affirm survey research by premier polling firms Global Strategy Group (D) and the Tarrance Group (R), which found a major disconnect between people who use short-term lending products and those who do not, with 80 percent of borrowers saying current payday loan requirements are enough, compared to only 47 percent of non-borrowers.

"Too often people who have no need for payday loans lead the charge to eliminate them," said Fulmer, "while dismissing the rational actions of millions of Americans who value the service."

Payday loans are unsecured, short-term loans typically due on the borrower's next payday and involve a simple, flat fee that does not compound interest; they are used by a wide cross-section of American families. The average Advance America customer is 43 with a median household income of $49,696 (compared to U.S. average of $50,046); 79 percent are homeowners and 96 percent have a high school degree or higher (compared to U.S. averages of 65 percent and 85 percent, respectively).[1]

Customers choose payday loans as a cost-competitive, well-regulated option for meeting short-term financial needs and unexpected expenses. The typical cost of borrowing $100 from a regulated payday lender is $15[2], compared to $25 for a $100 online loan[3]; the average credit card late fee of $27[4]; the $34 average bank overdraft fee[5]; or the $46.16 average utility late/reconnect fee[6].

Founded in 1997, Advance America, Cash Advance Centers, Inc. is the country's leading provider of non-bank cash advance services, with approximately 2,400 centers across the country. The Company is a founding member of the Community Financial Services Association of America (CFSA), whose mission is to promote laws that provide substantive consumer protections and to encourage responsible industry practices. Please visit Advance America for more information.

[1] Advance America demographics based on approximately 1.1 million customer records from January 2014 to December 2014; U.S. averages based on 2010 Census.